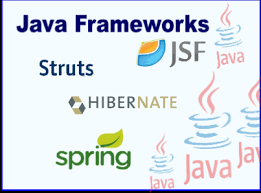 Java is a popular and robust programming language. Once combined with a framework, it can offer the best solutions for various domains including IT, stock market, big data, cloud computing, banking, eCommerce, and many more.

When a pre-determined code acts as a template for a developer to reuse and develop into an application, this works as a framework. It enables the developers to program multiple apps without creating each line of the code right from the scratch. It highly enhances the coders’ efficiency and reduces app development time.

Though there are several frameworks developed on Java, some are extremely popular to create various web apps, network apps, ORM, logging, and testing. These have exclusive benefits and we cannot determine which is better than the other. That’s because each framework has distinct purposes and accomplishes the same in its own way. You cannot compare between an orange and an apple once it comes to nutritional value, right? The situation is somewhat similar here.

With several concepts like aspect-based programming and dependency injection features, Spring has taken the realm of development to the next level. This is an open-source framework mainly used to develop enterprise applications.

It enables the developers to create loosely attached modules where in-app dependencies are directly governed by the framework and not depended on any external library of codes.

The framework is extremely exhaustive and has multiple features like easy configuration and security. User-friendliness is a great aspect of the framework. Due to its immense popularity, it’s easy to find lots of documentation as well as an active community. The codes are clean and quite easy to comprehend.

In Spring, instead of the application taking control of the sequence of the flow, an external controller drives it. As you may understand, this gives enough flexibility to the app. Three types of dependency injection are conducted in Spring – constructor injection, method injection, and setter injection.

Now, in Spring, objects are referred to as beans. The application context is a subset of bean-factory that is used in highly complex applications.

With its convenience of use and versatility, Apache Struts has become a powerful open-source framework to develop. It depends on a model view controller model (MVC model). Basically, Struts can separate the controller, view, and the model or data and thereby creates a bond between each of these. The entire thing is saved in a configuration file named struts-config.xml.

The action object forwards the application flow. The controller of the action servlet is where the developers can write the templates for the View. The user data is later maintained by using an action form Java bean.

Developers prefer to use Struts as these are easy to set up and offer a great range of extensibility and flexibility over the conventional MVC technique that uses only JSP and servlets. If you are looking for a career as a potential web developer, a piece of knowledge in Struts is a must these days.

Hibernate is not a full-stack framework. Agreed. However, it totally changes the way we comprehend the database. This is an ORM or object-relational mapping database for Java application. As you know about SQL (Structured Query Language), the queries in Hibernate are known as Hibernate Query Language or HQL.

The best part about this framework is that it can directly map all the Java codes to the respective databases and vice versa. The main file here is hibernate.cfg.xml. It can contain all the information about how to map Java codes with database configuration. It solves two major issues of JDBC. Firstly, JDBC doesn’t support any object-level relationship. Also, if you seek to migrate to a distinct database, the queries of the earlier version may not work. Naturally, you need to write codes all over again – draining your time, effort, and resources.

Hibernate solves the problem simply by offering an abstract layer. It enables the codes to stay connected with the database. The developers need not write the codes more than once as the written codes become independent of the user database.

As you may have understood, Hibernate has become a popular and indispensable Java code due to its convenience.

Apache Wicket is popular for having a compact structure. You need no configuration files and XML as only the basic knowledge of Java and HTML is enough to access it.

The primary feature of Apache Wicket is the POJO model. Here the components are stacked together along with reusable links, pages, buttons, forms, images, behaviors, and containers. The developers can use them as and when required.

So, there you go – an overview of all the top Java frameworks available in recent time. What’s your take on it? Would you like to add a few more names? Go on, the comment box is open for all!… Read the rest